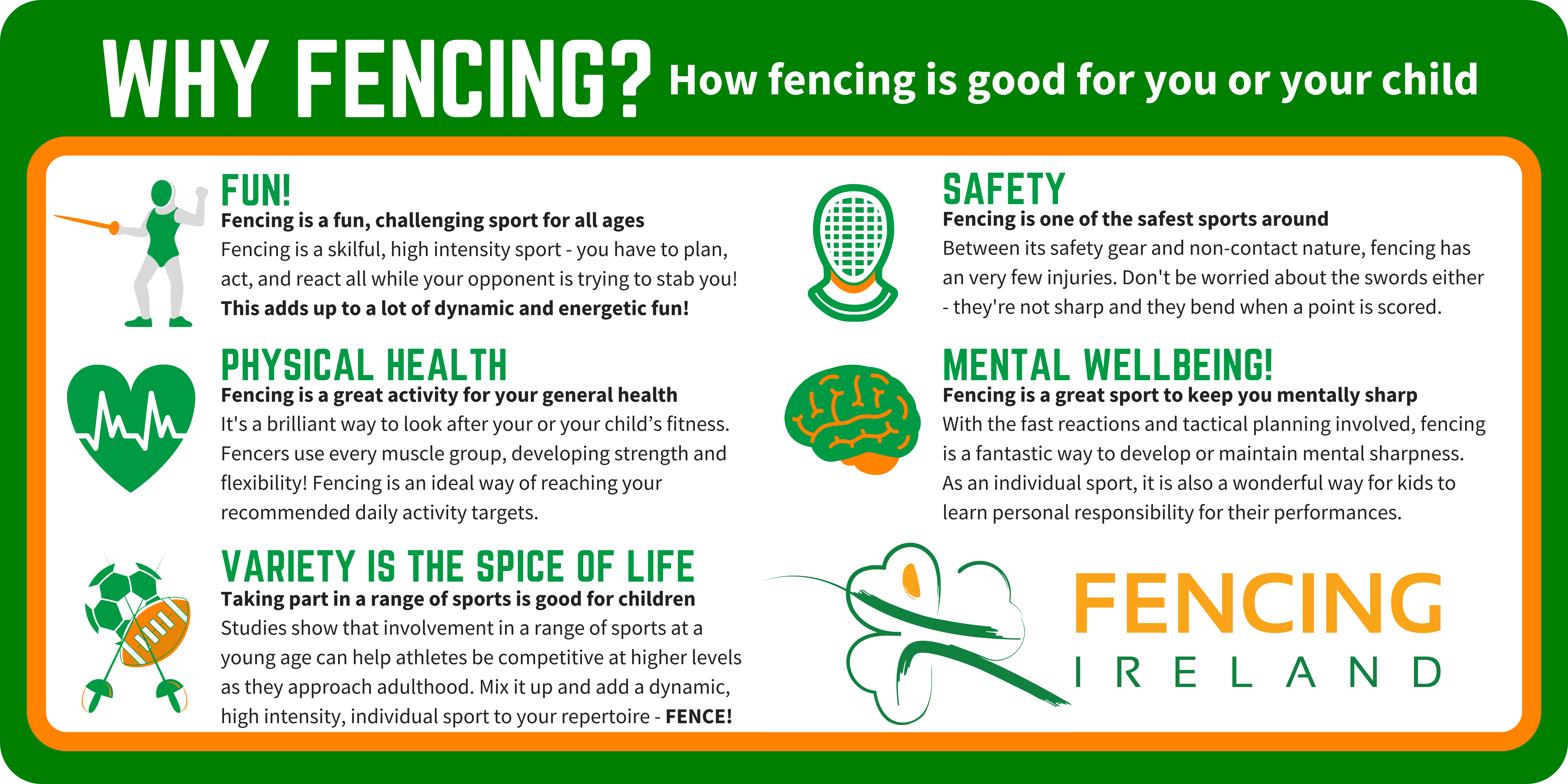 Click here to open the infographic in new tab.

Fencing is a sport where two competitors at a time use sporting swords to score points - typically 5 or 15 - within a set time. Fencing is both highly technical and tactical - a dynamic, fun sport that appeals to people, young and old, as it provides a different avenue of engagement in sport, to the more common team field sports.

Fencing is a vibrant and growing sport in Ireland. Clubs exist across the country and competitions are held to accommodate everyone - youth and school events, university competitions, senior competitions, and veteran events. No matter one's age or level, beginner to international, Irish fencing has something for everyone!

There are three different disciplines in fencing, each using a different type of sword and each with their own specific rules - foil, épée, and sabre. You can learn more about each of them below.

The foil was a training weapon for duellists. Training was carried out wearing protective padding and using a walnut on the tip of the blade to prevent injury. In this weapon, the emphasis was put on attacking the vital organ areas, specifically the torso. It gradually developed its own unique rules and style. As duelling became less commonplace, foil took over as a major competitive sport with a distinct difference from épée fencing: “right of way”.

The rapier was developed in Italy during the 16th century, and is still used in the sport today, though now known by a different name – the épée (simply the French word for sword). Its evolution to the modern-day weapon aroses from the adaptations that were required to improve its offensive and defensive capabilities. Originally it was a very light, long blade, which could inflict damage using both the point and edge. It required athleticism and expert technique to be wielded effectively. Of the three weapons used today, the modern épée – in spite of many improvements – remains the closest to its roots.

The sabre came to the sport from the 18th century Hungarian cavalry, and the modern weapon is descended from the Turkish scimitar. It is a simulation of horseback battle, as the target area for the weapon is above the waist. This allowed combatants to “spare the horse and not the man” at a time when good cavalry horses were difficult to come by, especially on the battlefield. Sabre style is also subject to the “right of way” rule. Sabre fencing tends to be the fastest of the three.

Fencing has been included in the modern Olympic Games since their inception in 1896. Along with swimming, gymnastics, and athletics, it is one of only four sports to have been contested at every Summer Olympiad.

The 1912 Olympics introduced the Modern Pentathlon, which features a one-hit variant of épée fencing intended to simulate a duel to first blood.

Since then, the sport of fencing has continued to develop, with continual improvements in safety standards, athlete training, and fencing technology. The most notable change over the last century has been the development of electronic scoring, which has allowed for a dramatic increase in the pace of the action, while weapons and protective gear have become lighter and safer.

Modern day fencing has been constantly refined and perfected, with every generation of fencers striving to improve on their forebears.

Where can I fence?

There are fencing clubs all over Ireland. You can find contact details for your local club here: https://www.fencingireland.net/find-a-club/

If you are based in Northern Ireland, you can find details on NI Fencing's website here: https://www.nifencing.com/

For your first session, wear a tracksuit or similar clothing which allows freedom of movement. After that the club will advise you on what else is needed and will generally have a supply of equipment available until you decide you want to get your own.